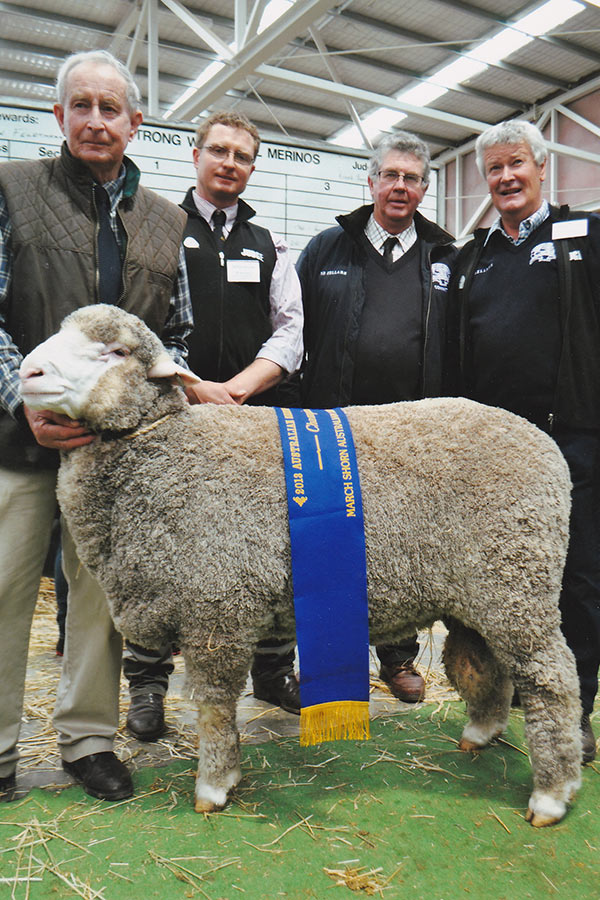 Ross Wells with Willandra’s Australian champion all-purpose hogget at the 2013 Australian Sheep and Wool Show, Bendigo, which sold for $35,000 to New Zealand buyers and with semen sold to all sheep producing states in Australia.

There are different philosophies on breeding sheep and I am sure there are benefits to be gained from them all.

The main aim is to keep an open mind to everything and you must take into consideration the environment you are in or the one into which you wilI be selling your sheep. There is one word that is in my mind all the time and that is “balance”.

Our decision is influenced greatly by the fact that we have the courage to enter our sheep into the Show ring: to stand them up against the opposition and this does take a bit of guts. If you think I am joking – be game and have a go.

I know from my own experience that when you are looking at your sheep at home they are champions. Then take them to a Show and you really find out. Sometimes you win and other times, to your surprise, you get a pounding and that is when you really get an opportunity to learn more about your sheep. Until you are prepared to do this, there is a great possibility you are fooling yourself.

When it comes to measurement there are three major issues to look for – fleece weight, fibre measurement and body weight. These three factors are all very easy to measure and have high accuracy.

The big problem today is we are all being pushed into what I would call, over measurement.

This is combined with estimations and adjustments and with comparisons made across Australia there is a probability for inaccuracies to occur either by the wrong information being fed into the system compounded by the low heritability of some measurements.

Unfortunately with all the extra information it is easy to take your eye off the ball and away from the main game – fleece weight, fleece measurement and body weight – the raw data.

This gave them the opportunity to benchmark their sheep against other bloodlines and in particular to test the fashionable concept that the sheep bred by using Australian Sheep Breeding Values (ASBVs) and Estimated Breeding Values (EBVs) was the only way the sheep industry would advance.

Although the two teams entered by our clients were the standout bloodline on the day, placed first and second, and by a considerable margin, I am sure that these two breeders, had they been on any other similar bloodline, would have done just as well.

Ian Gould, whose team was placed first, is a young, keen and enthusiastic person who has the confidence to back his own decision-making. Unfortunately today it seems many of the younger generation appear to lack this confidence and seem to feel they have not got those skills to select and breed sheep without having a set of figures in front of them that will tell them which sheep to buy.

Although I class Ian’s sheep, he selects his sires on the day with very little input from me. It must give him a good feeling to have achieved so highly with his sheep. He does pay good money and buys at the top end of our sale.

Maurice Hicks who had the second-placed team, which had an average wool cut of 9.4 kg of 11 months growth at 20.6-micron, selects his rams on sale day with the assistance of his classer, Steve Phillips, using the raw data available at the time of the sale – fleece measurement and body weight.

Maurice has the belief that the best way to get lifetime production is to give the animal a good start in life: it gives them a great production base for the rest of their lives.

So much of what we read and hear today is that the way of the future is measurement and more measurement with the belief it is the only way that the sheep industry will move forward. This is certainly greatly assisted by today’s technology.

When this is presented to you at the many forums of today, and if you are a vulnerable person who thinks you lack the skills and confidence in your own ability, it seems that you can’t miss with this method of selection.

The first thing I would ask you to realise is there are some studs who have been using measurements for years and years and 50 years ago were probably on a par with their counterparts. The question is why are these studs now not way out there in front of everybody else – not so.

When talking to those from studs using EBVs, they tell me this is the way of the future and it is a great way to sell rams. I guess the thing that concerns me most is that the geneticists and scientists promoting and pushing this theory are many of the same people who 15 to 20 years ago said that unless the producers of medium and strong wool went much finer, they would go broke.

The new Lifetime Productivity Project trial being conducted and funded by Australian Wool Innovation with the aim of measuring the productivity and returns from the different types of sheep and different philosophies on breeding is a great project. I believe from this we will see some very interesting results.

This young sire is having quite an impact in the Poll breed. He was sold to a New Zealand buyer and semen has been sold to many studs across Australia.

Instances like this are happening all the time, giving the industry productivity gains that come without any cost to the woolgrower levy payer.